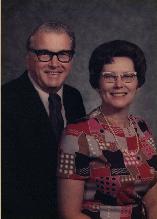 Rose Sauer was born in Detroit, Michigan on September 18th, 1919, the daughter of Joseph L. Sauer and Catherine T. (Schloud) Sauer.. She married Clarence A. Waldorf on June 24th, 1939 in Detroit. Together, they had 5 children.

Rose's father, Joseph Lawrence Sauer was from Cleveland where the family owned a barrel-making company, possibly with the name "Sower". A family story is that young J.D. Rockefeller placed an order for 200 barrels and then couldn't pay for them when the barrels were ready causing a severe financial crisis in the Sauer Family. Eventually Rockefeller took the barrels for fifty cents on the dollar when Rose's grandfather closed the business. The story indicates that the family then scattered. Joseph's older brother John changed his name to Summers at some point and it could have been because of the financial problems. Rose's father left Cleveland and looked for work in Minnesota and Wisconsin. He became an apprentice in a foundry and then moved to Detroit when he took a job at Dodge foundry.

One of the first activities of the Knights of St. John that I attended was a Moonlight. My sisters, Bernadine and Loretto were members of St Boniface Auxiliary already. My father, Joseph was a Captain in the Knights, and we supported all the money making projects. The Moonlight Boat stopped at Tashmoo Park that we could enjoy the big dance pavilion. Walking the Boardwalk to the pavilion, we had our first encounter with the Waldorf group. They were teasing and calling attention to brother Nestor who was recently married to Louise DeCico. This was 1934.

As I became active in the drill team, I found we had to raise money also. All decided on a picnic. As we needed someone to take the beer to the site, Elizabeth Arnold and I decided to ask Clarence and Buddy to accompany us. That turned out to be our first date with the popular Waldorf boys - 1935.

Really, I say date, but most of our activities were group outings. We had Halloween parties, card parties, dances, picnics and breakfasts after the Knights and Auxiliary annual Masses.

When Clarence started to pick me up to watch baseball games, my parents did not think there was anything wrong with the idea. Of course, Buddy would stop and pick up Elizabeth. Yes, St. Anthony Knights had a baseball team in those days.

Our drill team went to the convention to compete. Hildegarde belonged to the drill team also. Conventions were fun with three days of Rapps, Arnold, Sauers, Waldorf and Zinks - besides all the other members - sight seeing and partying.

Dad and Mom Waldorf decided to buy the 30 acres near Greenville that abutted the Charles Wolschon's land. Then we really were going together. The guys liked to fish and hunt and Elizabeth and I learned to fish and hunt. Sunburn in the summer and awful colds in the winter were endured those first years.

When Dad and Markey were in the automobile accident, the trip to the hospital seemed endless, but when we arrived and saw how Markey just lay there, we knew that now was the time for prayers.

At this time, Clarence spent more time with his family. He also helped by making some of the payments on the farm.

Health returned to Dad and Markey. Dad was at the farm all the time now. Everyone would go to the farm taking groceries. Opening of fishing season, we'd all be there - see the movies?

We married June 24, 1939 at St. Catherine Church in Detroit. I was working at Acme White Lead and Color Works. Jennie Petersen and Margaret Ackerman were two of my friends that came from work. Margaret met Fred Arnold. Margaret and Fred dated and later married. In the meantime in 1941, Elizabeth Arnold was wed to Larry Waldorf (Buddy). This created more relation involvement --- all because of the family's love for the Knights of St. John.

This is 1991. Clarence and I have been married 52 years. We have five children -Marjorie, Leonard, Robert, Maxine and Mary Jo, and ten grandchildren - Julie, Jeff, Jean, Bob, Deb, Tom, Kevin, Paul, Ann Marie, and Nathan. 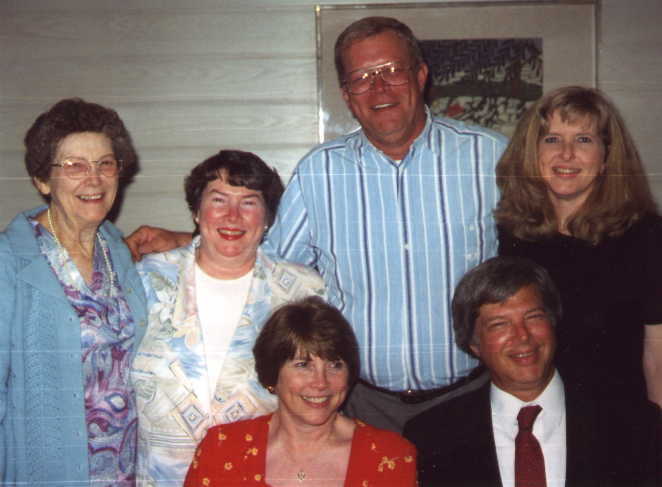 Rose Waldorf and her 5 children on her 80th birthday

Return to the Sauer Family Tree

Return to the Waldorf Family Tree